“A Special Thank You!” 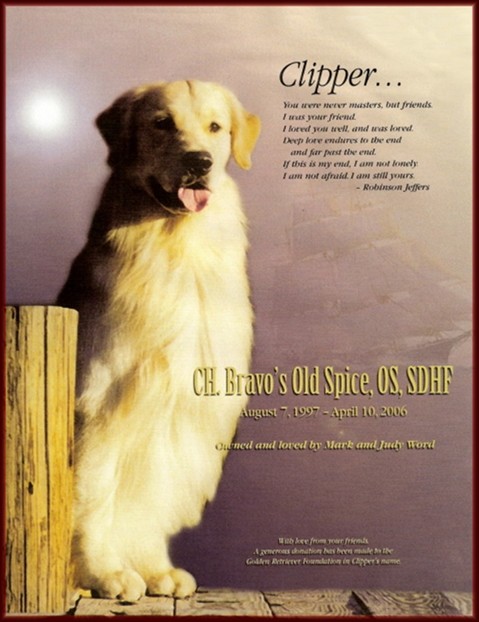 On these pages we proudly present Goldens sired by Clipper
CH Bravo’s Old Spice OS SDHF
We would like to give special thanks to the breeders and owners for keeping us
up-to-date on the Clipper kids and grandkids!
A little part of him lives on in them …
Judy Word and Mark Word
Bravo Golden Retrievers
* * * * 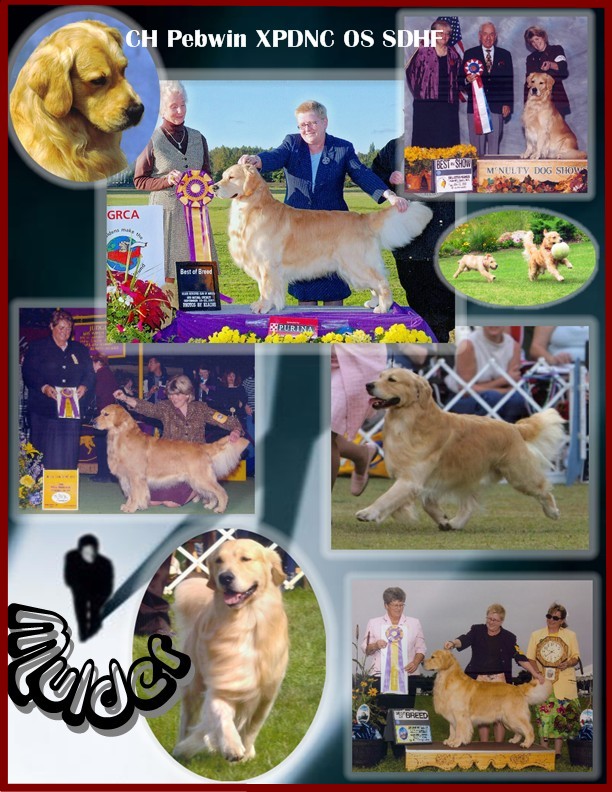 Mulder is the result of a carefully planned breeding of two very special Goldens, Clipper and Dazzle. He has lived up to his heritage in every way possible!

Mulder is a Best In Show, multiple Specialty Best of Breed winner, GRCA Regional and National Specialty winner, GRCA Show Dog Hall of Fame member and GRCA Outstanding Sire. The recipient of the 2004 Pedigree Award for #1 Golden Retriever, he was also awarded Best of Breed at the prestigious Westminster Kennel Club in 2004. Mulder came out of retirement in the Fall of 2006 to win the GRCA Eastern Regional, shown by Berna. Then after another whole year off, Mulder and Berna flew to Seattle for the 2007 GRCA National Specialty where Mulder was awarded BEST OF BREED!! And to top that off, he also won the Stud Dog Class. 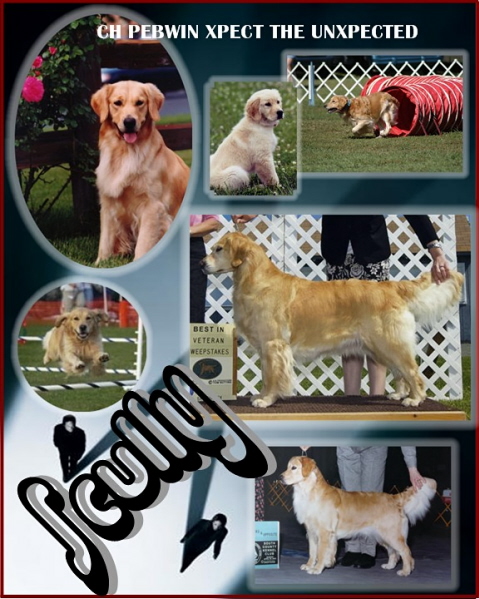 Mulder’s litter sister, Scully, finished easily and currently holds multiple Agility titles with more to come! She is proving to be a great producer with two Champion offspring, both of whom garnered specialty majors along the way, and a third with his first specialty major. These three Scully kids have different sires, indicating that like her brother and her impressive sire and dam … Scully will earn accolades as a producer.
CH Pebwin Xpect The Unxpected OA AXJ
Breeder: Berna Hart Welch, Pebwin Golden Retrievers
Owner: Heather Donnelly
Dam: CH Pebwin Razzle Dazzle OD SDHF JH
* * * * 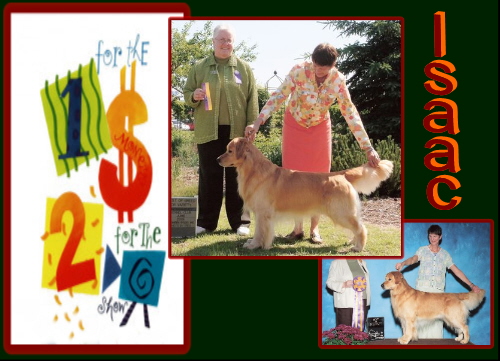 Isaac, who is always owner handled, was Winners Dog for two points at his first show at eight months and finished just after his second birthday going Winners Dog and finishing his AKC championship at the Des Moines Golden Retriever Club Specialty. He has a number of Group placements, including a Group One and was Best of Breed at the Northern Flyway Golden Retriever Specialty. North of the border in Canada Isaac finished his championship in just one weekend. Isaac is presently working on his Utility title with two legs to-date and is accomplished in Agility with advanced titles.
BISS Am/Can CH Westmarch One For The Money UD, AX, AXJ, RAE, OS
Issac has brains and beauty!
Owners and Breeders: Paula Ellis and Judy Super
Dam: Am/Can CH Mach 3 Westmarch Just One Look OD, UD, RAE, ADHF
* * * * 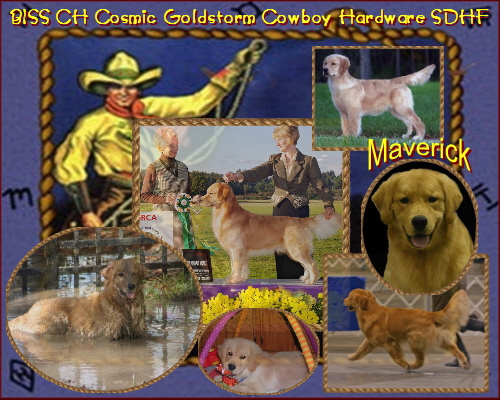 Maverick won his AKC championship out of the puppy classes in three weekends! Maverick has 20.5 SDHF points, after winning Best of Breed at the Specialty Show in Norman, Oklahoma on November 16th. Maverick has eleven Best of Breed wins, including a Best In Specialty, two Group 1 wins, two Group 2 wins, two Group 3 wins and a Group 4; all achieved since the first of the year. Since April, Maverick has been on “Vacation” waiting to grow up and is now beginning to compete on a limited basis.
BISS CH Cosmic Goldstorm Cowboy Hardware SDHF ~ “Maverick”
Breeder: Diane Mueller and Barney Roberts
Owner: Barney Roberts and Diane Mueller
Dam: CH Goldstorm Pardon Me Boys
* * * * 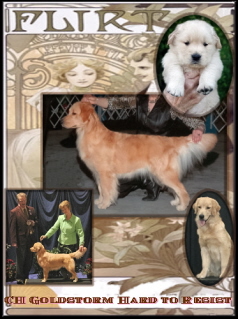 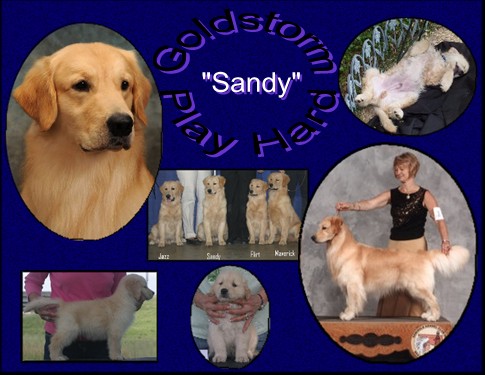 Sandy got his AKC Championship in five months and got both of his major wins in one weekend! He won all three days in Monroe the weekend he accomplished his Championship. Sandy is currently training in the field … he loves to retrieve and loves the water.
Sandy is a littermate to Maverick and Flirt
CH Goldstorm Play Hard
Breeder: Diane Mueller and Barney Roberts
Owner: Jane Ann Allen
Dam: CH Goldstorm Pardon Me Boys
* * * * 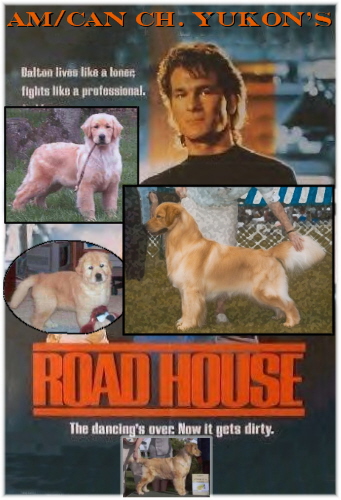 Dalton started his show career by winning the 6-9 Puppy Class at the GRCA Eastern Regional Specialty. He then went on to win Best Puppy In Specialty and Reserve Winners Dog at Garden State’s Golden Retriever Specialty from the 9-12 Puppy Class.
Dalton was pointed from the Puppy Class and he took four reserve winners dog as a puppy. Dalton finised his Canadian Championship in two weekends at seventeen months old and his American Championship at twenty-five months old taking ten reserve winners dog along the way.
Am/Can CH Yukon’s Road House
Breeder and Owner: Charlene and John Devens
Dam: Am/Can CH Thornlea Yukon’s Reba
* * * * 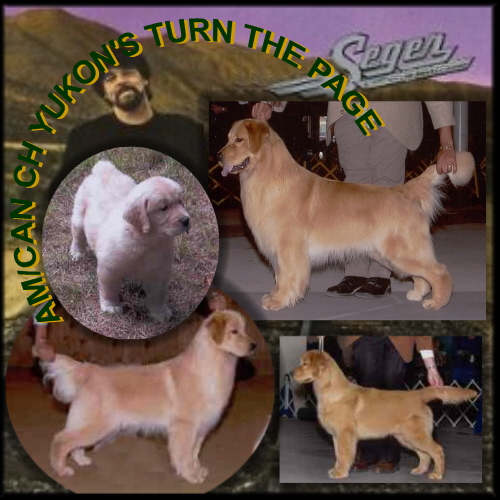 Seger is out of the repeat breeding of Clipper x Reba, making him Dalton’s little brother!
Seger started his show career by taking Best of Winners for two points his first weekend shown at six months old. He then went on to win reserve winners dog at the Yankee Golden Retriever Club Specialty at nine months old.
Seger won Best of Breed from the puppy class at eleven months old and then went on to win the Sporting Group. Seger finished his American Championship at twenty-two months old and went on to win Best of Breed (over specials) and a Group 4 on the same day!
Am/Can CH Yukon’s Turn The Page
Breeder and Owner: Charlene and John Devens
Dam: Am/Can CH Thornlea Yukon’s Reba
* * * * 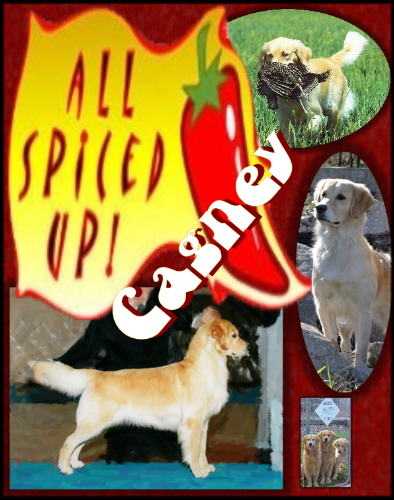 Cagney began her working career and her show career just before age two. She finished her JH and SHR at twenty-two months of age and got her first point in the show ring. Cagney then took time off from conformation to explore other working areas before re-entering the show ring at age four.
Cagney finished her show career in just three and half months with three majors, one of them under breeder judge, Ann Yuhaz, at the large March spring circuit in Fort Worth, Texas. She has now gone on to the compete in other venues and rack up the titles, including the elusive VCX.
SHR CH GlenGowan JusCoz All Spiced Up JH CDX AX AXJ WC VCX
Owner: Dr. Tim and Lynda Williams
Breeder: Richard and Betsie Caldwell
Dam: Bargello’s Bree of Glengowan OD
* * * * 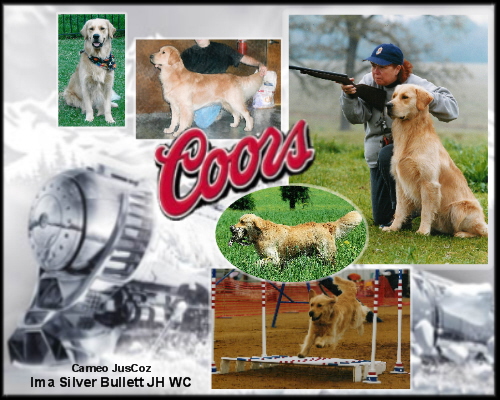 Coors took his time growing up so his show career was limited. While he was maturing he earned his JH just after two years of age and his WC later that year. Coors then went on to train for Senior Hunt tests, learn agility and work on obedience skills.
Coors passed away tragically at the age of four, just before his first senior hunt test and just two weeks after his first agility trial. At his first agility trial, Coors “Q’d” in both standard and jumpers with weaves, both days with first places all around.
His smiling face and sunny disposition will always be remembered …
Cameo JusCoz Ima Silver Bullet JH WC
(2NA legs, 2NAJ legs)
Owner: Dr. Tim and Lynda Williams
Breeder: Starlet Heavner & Brenda Hux
Dam: Can CH Cameo Kiss of Fire
* * * *
↑